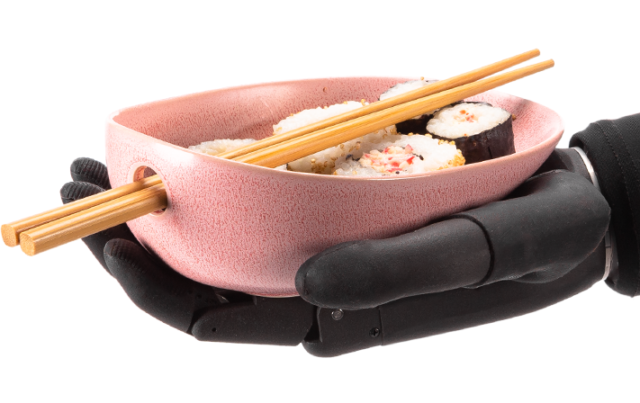 ACCORDING TO CONTROL SYSTEMS

Prosthetic arms use different control mechanisms, including body power, power from external sources, or both; that is hybrid control.

Body control refers to both the system of control and the power source from which the prosthetic arm and its components are controlled, that is, by using the user’s own body force and excursion.The force to control these components comes from the mechanical transmission of the muscular effort produced elsewhere in the body, distant from the amputation site. The body motions are transmitted through a system of harnesses and cables. Harnessing the force and excursion of the proximal joint motions through the prosthetic arm enables the operation of the prosthetic terminal device, wrist units, and elbow units, and miscellaneous prosthetic components. The adequate force and excursion required to operate these devices also relates to strength, range of motion, posture, and other patient factors. These prostheses are based on the extended physiological proprioception theory that states that the body-powered prosthesis should function as a mechanical extension of the human body for adequate feedback to the patient.

Externally controlled prosthetic arms are operated through a system of myoelectric signals, electrodes that sense muscle activity, electric switches, batteries, motors, touch pads, resistors and various other components providing external power, depending on the level of amputation.. The switches and motors are activated when electromyographic signals from the muscles are picked up on the surface of the residual limb through electrodes. Externally powered prosthesis can provide both digital and proportional control, as per the needs of the amputee. All externally powered systems provide a type of artificial reflex control that occurs automatically, that is, the user is not aware of the control decisions that are being made constantly.

An example of externally powered prosthetic bionic arm is that of the Zeus Bionic Hand which uses surface electrodes placed on the user’s skin. It has 5 individual motors and articulating digits that facilitate proportional control through a closed loop control system, which reduces the mental load on the user through artificial reflexes for a smooth performance.

Hybrid prosthetic arms use a combination of body power and energy from external sources to offer different advantages to the amputees, such as cosmessis, balancing the weight and cost of the prosthesis as well as accommodating different anatomical levels of the body. In many situations, these hybrid systems provide better outcomes. The common practise is to prescribe hybrid prosthetic arms to amputees with higher levels of limb loss, that require multiple movable prosthetic components to function. The most commonly used combination is that of a body-powered elbow unit with an externally powered terminal device.

Prosthetic arms function either as passive systems or as active systems, depending on the needs of the user

Passive upper extremity prostheses are ‘passive’, that is they do not provide any movements but only resemble the structure of an arm, hand, or fingers. These prostheses are commonly used to fulfill the cosmetic needs of the amputee. Even though they do not provide active motion, these lightweight prostheses offer a surface for stabilization of objects. The passive prostheses are covered with a cosmetic glove made from silicone to give the prosthesis a more realistic looking appearance. Sometimes, if the need arises, a passive prosthetic arm can be used with different multi positional joints to pre-position the joints of wrist, elbow, shoulder and fingers.

‘Active’ prosthetic systems have the ability to actively perform functions and motions required by the amputee. Active prosthetic devices provide control to the patient over opening and/or closing the devices. A major type of active prosthesis is an activity-specific prosthesis that is specifically designed keeping in mind the requirements of an activity or task that the upper limb amputee wishes to participate in, either for work, hobbies, sports or other activities.