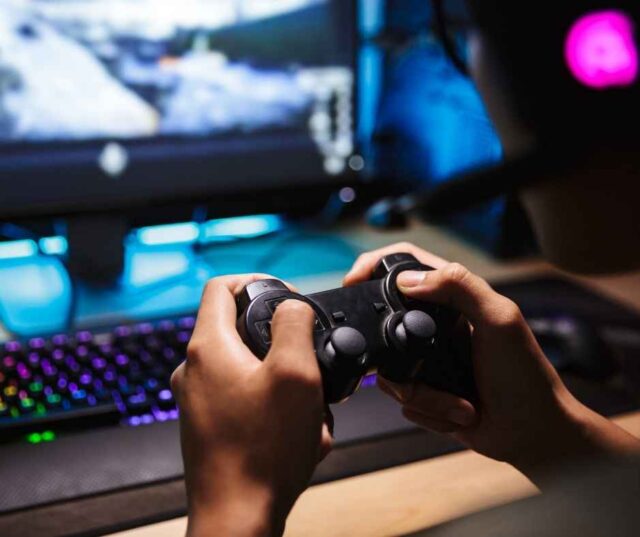 The game is a perfect 3D screen. At the risk of rain 2, you can invite your friends and play. The game will become more fun when you add more characters to the game. Let us see some of the popular characters in the Risk of rain 2 mod online game and learn to unlock them.

Characters in Risk of Rain 2, and unlocking them:

How to unlock Commando?

Commando is the default character preset in the Risk of rain 2 Mods game. Before the player moves to another character, Commander Character must be played at least a few times.

Commando’s basic moves and attacks are quite quick and easy to find out. He has a handy dodge, which will help the player run away from danger. Commando will also have a rapid-fire ability. This ability will kill the enemies. Just because he is a default player, do not underestimate his powers and weapons.

How to unlock MUL-T?

Beat the first level five times to get MUL-T.

MUL-T is a flexible fighter and has a different ability to fight. The character can swap when there are two attacks. One is a short-range, fast-firing nail gun and the other is a long-range sniper rifle. Both the rifles have unique features and operations while fighting.

When you swap the attack, you will have to swap the equipment. The ability or operation of MUL-T includes a speedy dash which you can run away from the enemies.

How to unlock Huntress?

Clear the first three levels without dying to get Huntress.

Do you know that the Huntress is the queen of AoE?  Huntress’s primary attack is slow and weak, but her abilities are good at melting groups. Her secondary ability is that she can bounce between up to six enemies. Use her wisely.

Huntress has one of the best escape abilities in the Risk of rain 2 mods game. It is the straight-up teleport. This ability makes sure you aim perfectly and can also be useful while jumping.

How to unlock engineer?

Complete 30 levels to get the Engineer character.

The Engineer character’s main objective is to place the gamer in the correct place and to defend themselves.

Engineer character has many other capabilities like deployable proximity mines, a bubble shield. The bubble shield will block the external attacks. It will also protect the gamer from basic attacks that fires volleys of bouncy grenades.

How to unlock artificer?

Spend 10 Lunar Coins to free her from the Newt Shop to get the artificer character.
Tip: You can collect the Lunar Coins when the enemies drop them all of a sudden.
The Artificer is a true-blue mage character. The character wields fire, ice, and lightning. Her capabilities are about cooldown management exclusively. She also helps the player in combing the elements.

Artificer has the power of lightning orb. The orb is used to charge up before releasing. It results in increasing in range and power. Her ice wall option freezes the enemies if their health is below 20%.

How to unlock mercenary?

Clear seven levels to reach the Obelisk level. Then, you will find a Celestial Portal. In the celestial portal, you can clear the seventh level. There you will find the Obelisk.
As the only current melee character in Risk of Rain 2, the Mercenary plays an important role.

Do you know that the Mercenary’s attack is just a close-range sword swipe? The player might barely use the weapon. Mercenary’s abilities are such as low cooldowns, and his secondary capabilities help the player launch into a horizontal sword spin on the ground and vertical spin midair.

How to install mods in Risk of Rain 2?

If you are interested in downloading the Risk of rain 2 mods game by yourself, here are the simple steps to follow to complete the downloading process.

• First, you need to download BepinExPack
• After downloading, you need to extract files and place them into the Risk of Rain 2 folder in the Steam
• Next, the payer must download R2API
• The next step is to extract R2API files and place them in the BepinExPack folder
• Finally, the player must download the mod you would like to add to Risk of Rain 2
• Then, Extract mod files into the R2API folder

Can the user play Risk of Rain 2 online with mods?

But, when the player is playing the Risk of rain 2 mod normally, the player cannot make use of the mods. Note that you must change the game mode to vanilla before starting the online matchmaking.

To start with the modding, the player must have access to a few of the APIs used by many mods. Let us see some of the relevant things you’ll have to face while downloading:

Different mods in the Risk of rain 2 mods:

Let us see the different types of mods the Risk of rain 2 mods:

The Lemurian character mod makes the player the enemy in the Risk of rain 2 mods. The mod gives you the ability to attack.
Lemurian mods involve shooting flames out of your mouth. Note a tip that if you stack enough flame, you can hit on enemies, and you can power up into the jumbo size. Amazing, right? The elder Lemurian mod has some special skills and capabilities.

Another popular mod is the Aatrox. Aatrox is one of the most wanted and popular mods in the Risk of rain 2 mods.
The Aatrox may seem complex.

The original Risk of rain 2 mods character is the Sniper mod. But, it did not make the jump to the sequel. The Sniper’s capabilities are taking down and killing the enemies even from a distance.

Multiplayers can add Share Suite mod if your game is becoming intense. If you pick up specific loot, every team member gets a copy of that loot. Here, the money will go into the shared pool. After that, the players can use the recyclers. The recyclers are used by the players to ditch items without affecting anyone else’s inventory. The Share Suite mod helps the player rebalance the Risk of rain 2 mods.

Skills Plus Plus is another popular mod which is used the Risk of rain 2 mods that turn the mode into a more progression-focused game. The skill plus plus mod helps the player to earn a point that will, in turn, help them to use their powers to power up or develop their skills.

The UrnIgnores Allies mods are also one of the famous mods in the Risk of rain 2 mods. This mod makes the team and the team members sap the health. If you are a multiplayer, you will have to face this issue.

The Ronald Huntress mods are quite the best in the Risk of rain 2 mods.