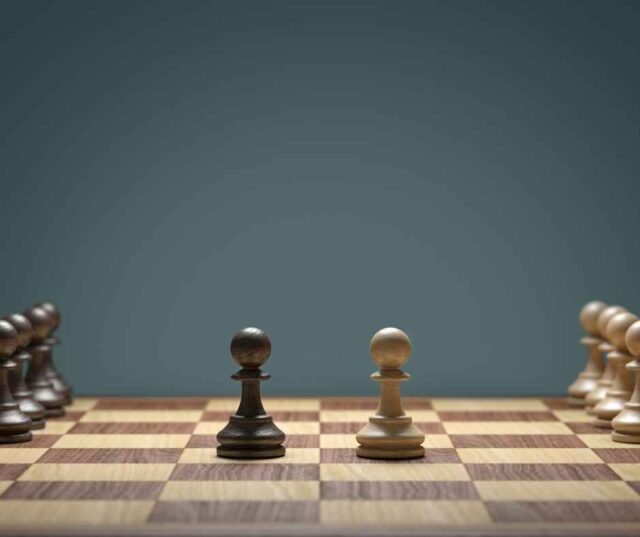 How to set up a Chess board ? If you’re a newbie, you’ll need 16 black and 16 white pieces to get started. For a more in-depth look at how chess pieces are put up, including additional images.

At the start of a chess game, each player has eight pawns. On the chessboard, pawns are the least valuable chess pieces. If you’re still a novice, losing one of the pawns throughout the game isn’t a big deal.

At the start of a game, each player is given four minor pieces: two knights and two bishops. The value of knights and bishops is about 3 pawns. In addition, each player possesses two rooks, which are more expensive chess pieces, worth five pawns apiece.

The queen, the game’s second most valuable piece, is the second tallest chess piece on the chessboard. Each player possesses a strong queen worth nine pawns. Do you realize how significant she is? She is more valuable than all of your pawns combined.

The king, on the other hand, is the most crucial chess piece! You must look after his safety throughout the game; else, you will lose. In chess, the main aim is to checkmate the king.

As a result, when attacking your opponent’s king, yours must constantly be defended by the other pieces. You can’t measure the worth of your king in pawns since it would be impossible.

The Chess Board Set-Up:

Let’s take a look at the chessboard framework before we get into the chess pieces. You can see a total of 64 squares on board.

The numbers 1 to 8 represent horizontal lines, while the letters a to h represent vertical lines.

As a result, each square is assigned a number and a letter, making it easier to describe how the chess pieces are placed.

Your chess pieces are put up on the first two ranks – lines 1 and 2 – if you are the player with the white pieces at the start of the game.

Your chess pieces are put up on the last two ranks – lines 7 and 8 – if you are the player with the black pieces at the start of the game.

The chessboard without the chess pieces appears like the image on the right from White’s perspective.

Step 1 – Setting The Board

When playing chess, the first step is to properly arrange up the pieces. To begin, turn the board over so that the bottom white square is facing the right side. This implies that at the right corner of the board, both players will have white squares.

Your pieces will be placed on the two horizontal rows closest to you (on the bottom side). Chess, unlike checkers, makes use of every square on the board.

Each rook has five points and can only move vertically and horizontally if the square isn’t occupied. Moving on how to set up a chess board , the four corners of the board are initially taken by four rooks. The most essential component is without a doubt, King. However, after the Queen, the Rook is the most significant piece in all other components. It has greater importance and value due to its extensive range of movement.

All chess pieces except knights and horses are exceptions. They are capable of jumping over any piece, white or black. They take two and a half squares in either a horizontal or vertical direction, then turn to take their place. Each Knight has three points. It is said that if you can properly arrange your knights, you are a skilled tactician.

Arranging knights during chess setup is simple; simply position each of your knights next to the rook in the first row.

Place the bishops next to the knights after they’ve been placed. Continue to move the pieces towards the center of the board as you place them. Next to the knights, place the tall, round-headed bishops. Bishops may only travel in diagonal directions.

Check that one bishop is on a black square and the other is on a white square when putting the bishops.

Positioning queens in chess setup is most perplexing, isn’t it? The primary point of contention in the chessboard set is whether a White queen should be placed on a white or black square. Don’t worry, I’ll provide you with a solution. With this chess set up method, I’ll also show you a better approach to get out of this mess. Because the queen has 9 points and can act as both a rook and a bishop, it is said to be a mixture of the two.

Here’s the answer to the question of how and where the queen should be placed. After all of the other pieces have been put, just two squares remain. Remember to place the White Queen on the white square and the Black Queen on the black square.

Place the king on the final remaining square of the first row. The king is the highest item in the collection. It bears a raised cross on a circular crown. Your entire first row will be ready once you’ve positioned the king (this row is known as the rank).

The monarch can travel in any direction he wants, but only once in each square. This implies you’ll need to make sure it’s surrounded by and protected by other components.

What are the appropriate chess pieces set up?

How to Make Sure the Positions are Correct

Perform the last check of the pieces and their locations before beginning the game to confirm that the chess pieces have been put up correctly.

How The Board Works?

The squares on the chessboard are 1.25 inches wide, while the king’s base is 1.3 inches wide (approx. 65mm). For pieces in this age range, 57mm squares are typically the best choice. The chess board’s darker squares can range from black to dark green to brown. White or off-white squares can be used for the lighter colored squares.

Although most chessboards feature normal white and black squares, black and red squares can be found on occasion. Although this appears to be appealing, most players have stated that bright colors cause eye strain during gaming.

Special chess boards, which are incorporated straight into game tables, are developed for competitions. The squares, like those on a normal chessboard, must have the correct size and have enough space or boundaries to accommodate countdown timers and all captured chess pieces

On the sides of most boards, there are coordinates written that reveal the algebraic notations for the squares. These are useful for both amateur and professional players, as they indicate where square each piece will go to next. The vinyl rollup board is now the most popular choice among all players.

Even if you don’t have the skills to play like a grandmaster, you may make every effort to seem like a pro before the game begins. You may learn how to fill out the score sheet and chess etiquette, such as making polite small talk before the game and wishing your opponent good luck with a strong handshake.

However, if you don’t know how to put up the appropriate chess pieces, it will mark you as a rank novice right away.

Learning how to set up chess pieces and the proper chessboard layout may appear difficult at first, but with practice, you will get the hang of it.

If your opponent has their chess pieces set up wrongly, you might be able to deliver the first psychological blow of the war – nothing will make you feel quite as smug as pointing out that your opponent has positioned their queen on the wrong square before the game has even begun!

8 Reasons to Attend College in the Fall