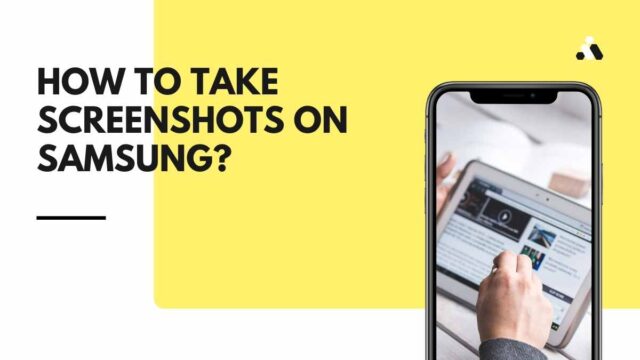 How to take screenshots on Samsung? You might want to take a screenshot for a variety of reasons. To save something from being erased on social networking. To remotely assist someone through an app. Use your mouse to create arrows or circles on your computer screen. Regardless of the cause, taking a screenshot is a basic function that everyone should be familiar with, so here’s how to do it on a Samsung phone.

How to take screenshots on Samsung Phones?

When you take a screenshot on your Android device, it records the content of your screen at that precise instant. This is useful if you want to brag about a recent high score or show someone what your employer said. Whatever your motive for taking a screenshot on a Samsung Galaxy smartphone, this tutorial will show you how to do it in different methods.

It’s the most frequent way to take a screenshot on an Android phone, and it’ll work on nearly every device (including Samsung Galaxy)

On Android, how to take a screenshot Palm swipe to capture on Samsung smartphones

Samsung Galaxy devices provide a slew of more snapshot alternatives on Android. It’s ideal if you realize what you’re searching for because the majority of them aren’t instinctive.  We’ll discuss “Palm swipe to catch,” since it’s an extraordinary element that we’re not sure why it’s not accessible on each Android cell phone. How to take screenshots on Samsung?

Step 1. Open Settings, scroll down, then tap on Advanced features to enable the option.

Step 2. Scroll down to the “Motions and gestures” section of the Advanced features panel.

Step 3. The “Palm swipe to capture” feature has a switch close to it. Toggle the function on by tapping the switch.

Step 4. You can also reach an additional screen by pressing the “Palm swipe to capture” button.

Step 5. On the next screen, you’ll find a toggle to enable or disable “Palm swipe to capture.” The animation below, on the other hand, is more interesting because it demonstrates how to use it.

Step 6.  In other words, hold your hand perpendicular to the screen as if you were going to karate chop it.

Step 7. To snap a screenshot, move your entire side of your hand across the screen, delicately brushing it from one edge to the other (left to right or vice versa) while maintaining that stance.

How to snap screenshots with Bixby on a Samsung Galaxy

On Android Samsung, you may ask Bixby, Samsung’s digital assistant, to snap a screenshot for you. Make sure the screen you want to record is listening before saying “screenshot” or “How to take screenshots on Samsung?.”

On a Samsung Android, use Scroll capture to snap a single long screenshot

Samsung has one more trick in its sleeve: the Scroll capture button, which allows you to take extended screenshots that capture all of the information you need in one snapshot. The animated Smart capture menu bar appears at the bottom of your screen every time you take a screenshot on your Samsung Galaxy mobile, providing more options.

Step 1. A new option called Scroll capture shows on the left of the Smart capture menu if the screen you’re on can scroll, whether it’s a web page or an app menu. Its symbol is a downward double arrow that bounces up and down.

Step 2. When you tap it, your Samsung Galaxy Android takes a snapshot of the region under your original capture as well, sewing the two together automatically.

When the data you want to share or preserve is too long to fit into a single screenshot, this capability comes in handy. Besides, you can continue to press the screen capture button to incorporate the following screen until it arrives at the bottom or you’ve got anything you desire.

The Smart choose edge panel is another option to snap screenshots on Android Samsung handsets. It lets you capture as much of the screen as you want, removing the need for further editing.

Step 1. One of your Edge panels is Smart select. To get to it, look for the Edge panel handle.

Step 2.  The handle appears as though a scroll bar and is towards the screen’s edge (on our Samsung galaxy, it was set by default on the upper-right edge)

Step 3. Slide the edge panel out by tapping and dragging your finger inwards.

Step 4. You may also navigate through the Edge panels by sliding left or right until you find Smart select.

Step 5.  You can shape your capture with the two buttons at the top.

Step 6. Resize the grid to fit the content you want to capture, then press Done to complete the snapshot.

Screenshot of the Samsung Galaxy S9 with Google Assistant

Google Assistant, unlike Bixby, is available on all Android smartphones and is well-liked by its customers. Screenshots from Google Assistant are also supported on the Galaxy S9. Holding down the Home Key or uttering “Hey Google” will activate Google Assistant. To Know How to take screenshots on Samsung one should be using Samsung mobiles.

Step 1.Open the app and select the screen you wish to record.

Step 2. Use the dedicated button or your voice to activate Google Assistant.

Step 3. Say “Capture a screenshot” or type the command while Google Assistant is active, and the assistant will take a screenshot and save it to the gallery.

Where Should You Look for Your Screenshots?